A groundbreaking picture book on depression with stunning illustrations.

With stunning black and white illustration and deceptively simple text, author and illustrator Debi Gliori examines how depression affects one’s whole outlook upon life, and shows that there can be an escape – it may not be easy to find, but it is there. Drawn from Debi’s own experiences and with a moving testimony at the end of the book explaining how depression has affected her and how she continues to cope, Debi hopes that by sharing her own experience she can help others who suffer from depression, and to find that subtle shift that will show the way out.

‘I have used dragons to represent depression. This is partly because of their legendary ability to turn a once fertile realm into a blackened, smoking ruin and partly because popular mythology shows them as monstrous opponents with a tendency to pick fights with smaller creatures. I’m not particularly brave or resourceful, and after so many years battling my beasts, I have to admit to a certain weariness, but I will arm-wrestle dragons for eternity if it means that I can help anyone going through a similar struggle.’ 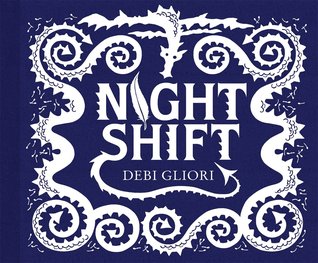 To be quite honest, when I requested this book from the lovely team at Allen and Unwin, I didn’t realise it was a picture book. It’s quite an understatement to say that I was surprised when I received it, haha. The back of the book says: “Fighting dragons is one way of fighting depression. This book could be another”, and even though that sounds like a completely ridiculous notion, it’s not completely wrong.

Honestly, Night Shift is such a beautiful picture book – it’s solely about depression and the battle, but it’s depicted in illustrations that really pack a punch. The illustrations are quite simple, as far as illustrations go. They look like they’re made out of charcoal or a graphite, not too sure, but they work very well for the intended purpose. They gave the book an overall sombering mood, but the simplicity of the illustrations made it suitable to give to a child, I guess?? I’m not too sure how to explain this, but I’m hoping the message is coming across clear.

The storyline is nice and relatable. It accurately depicts what depression feels like, and likens it to a monstrous dragon. It shows the battle of fighting it, as well as offering words of comfort for those going through it. It’s quite hard to explain what exactly depression is, and I think the story captured it’s essence perfectly.

I really enjoyed this, and I would definitely read this over multiple times. This is also a book that I think would be child-friendly, and would help them understand what depression is and how it affects people. 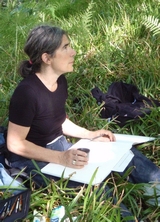 Debi Gliori is the creator of many wonderful books for children, including the Mr Bear series (with Orchard Books), our own bestseller No Matter What, The Trouble With Dragons (nominated for the 2010 Kate Greenaway Medal) and Stormy Weather. Debi lives in Haddington, East Lothian, Scotland. She has twice been writer in residence in the Shetland Isles. Read Debi’s blog at www.fiddleandpins.blogspot.com.